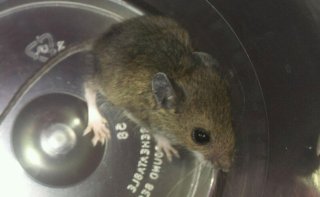 For the past few months, we have had the pleasure of the company of this sweet lil critter.  We call him ‘Moouuse’ (shown actual size, sorta). Since making his appearance, I have tried all manner of capture. Springing traps, snapping traps, sticky and spinning traps.  We even tried the neighbors cat. The level of desperation to rid my home of him stopped short of snakes; although barely.

Then the phone rings at work. It’s my son with the news: “we caught the mouse!” Apparently, after a long day exploring the bedroom, Moouuse, in true Goldilocks fashion, found his way onto the chair and cozied under my throw. While that seems relatively cute and harmless, I must clarify that it was not just any chair, he chose my knitting chair. I will repeat this so it can sink in…MY KNITTING CHAIR! Might I add it was not just any throw? It was my 3 winters long hand-knit cabled throw. For those tortured souls who actually follow this blog, you know what  an affront this is.  Those of you who are new to my rantings, gaze upon this photo: 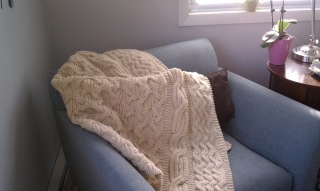 Could there be a more suitable throne for me, the Queen?  Right?  OFF WITH HIS HEAD, I SAY!  OFF WITH IT!
That’s a bit harsh, even for me.  Instead, it was dragged to the bowels of the tupper-chamber and forced into exile in the barren wasteland behind the barricade. Or, as my son tells it, scooped into a plastic container and set free in the neighbors yard.  I fear future attempts at escape in which case I can only hope the neighbor’s fierce lioness has its way!
Here’s something just for giggles: http://youtu.be/9bTbAsmPOKo

While you were away, I wrote this…

A Blast From the Past

handmade baby blankets, throws and hats and anything else that takes my fancy

How to sustain a spiritual discipline

... and all things creative

Knit One, Spin Too

Michele plays with yarn, food, and music in Portland

The Knitting Doctor
The Wisdom of Knitting

Miriam knits and thinks and seeks enlightenment in yarn

Lent Madness
A Year of Kayaking

My year adventuring in a kayak as often as possible

At the nexus of art and craft

the daily dog
Welcome to Knitting in France

My knitting and fibre passion

Welcome to my world

age is just a (biggish) number

u m b r e l l a j u n e
Foundation Operation X for languages, cultures and perspectives
%d bloggers like this: