Based on this blog, one would think I was sitting around doing very little in the way of knitting.  While I am not someone who cranks out projects like mad, I have managed to keep my needles busy in spite of one shit-storm after another.(Do I have to make this post ‘adult-rated’ for saying this?) 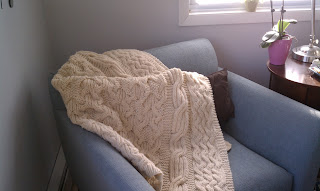 My biggest accomplishment this winter was, by far, finishing the Cabled Throw.  This project was knit over the course of 3 winters.  I never thought I would be able to mark it finished on my Ravelry page.  Here is the irony: My initial notes on the project page was to add a 😦   because the shape of the blanket reflected the change in my tension and skill over the years; starting out wide when my knitting was loose and “new”, to a gradual narrowing as my stitches became civilized.  My decision to change my 😦 to a 🙂 was due entirely to the encouragement of my friends and fellow knitters.  Over and over again, they told me how great it was to have a singular project with so much knitting history.  This confounded throw was telling a story!  Nothing dramatic, really, just a “Gee Girl, your knitting doesn’t suck anymore” tale.  This is my ‘Linus’, my ‘special needs’ blanket.  My boys love it.  I love it.  It smells like yummy wool.  Granted, it is impossible to fold, having no ends that meet, but at the rate it is being used, I cannot imagine folding it for some time.

While you were away, I wrote this…

A Blast From the Past

handmade baby blankets, throws and hats and anything else that takes my fancy

How to sustain a spiritual discipline

... and all things creative

Knit One, Spin Too

Michele plays with yarn, food, and music in Portland

The Knitting Doctor
The Wisdom of Knitting

Miriam knits and thinks and seeks enlightenment in yarn

Lent Madness
A Year of Kayaking

My year adventuring in a kayak as often as possible

At the nexus of art and craft

the daily dog
Welcome to Knitting in France

My knitting and fibre passion

Welcome to my world

age is just a (biggish) number

u m b r e l l a j u n e
Foundation Operation X for languages, cultures and perspectives
%d bloggers like this: